Since I published Violet on the internet some people asked me about how I did her, if I would do some kind of tutorial or making of about it. So here it is, really late I know, but I've described here a little bit about the process of production her.

This is a presentation I've made for a speech that I gave last year at college I studied, I hope you enjoy and take something useful from this brief making of.

For those who don't know yet, you can download the .blend file of Violet at Blend Swap.


* A big thanks to Angelo Garizzone who translated the making of to Italian.

The concept art was made by my friend Larissa, she is an awesome artist, you can see more of her work at laridk.com. Violet is a teenager girl with a kinda rocker style, a strong personality and posture. 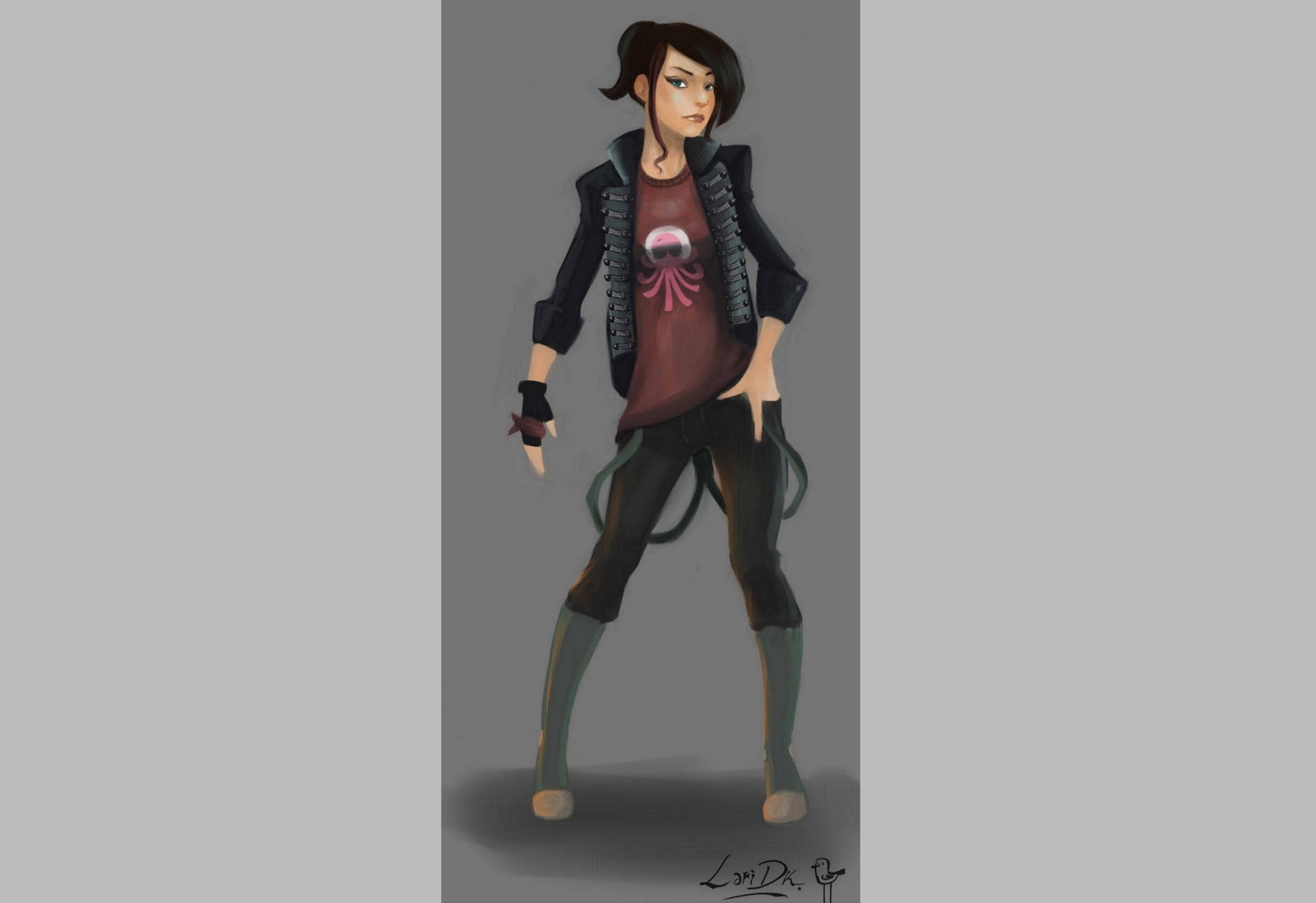 I start modeling using the plane by plane technique, after I build the entire body with a good topology I refined the anatomy using the Sculpt tools. I don't use this way anymore for a long time, nowadays I sculpt first using multires or dyntopo and then I made the retopology.

Now talking a little bit about the artistic side of the modeling/sculpting, I've marked in red some important aspects of the female body anatomy. I used the proportion of seven heads for the body, the end of the mouth match with the lacrimal part of the eyes, this is a slight stylized proportion and can give a cute look to the character. Her jaw has a rounded and soft look, both in front and side view, observe the diagonal lines of the side view and how they relationship with others parts of the face. Notice how the shoulders are just a little bit narrow than their waist, the elbows match with the end of the rib cage and the tip of the fingers match with the middle of the thigh. Also, a very common mistake in the anatomy that beginners make it's about the position of the breasts, they point outwards instead of pointing to the front. 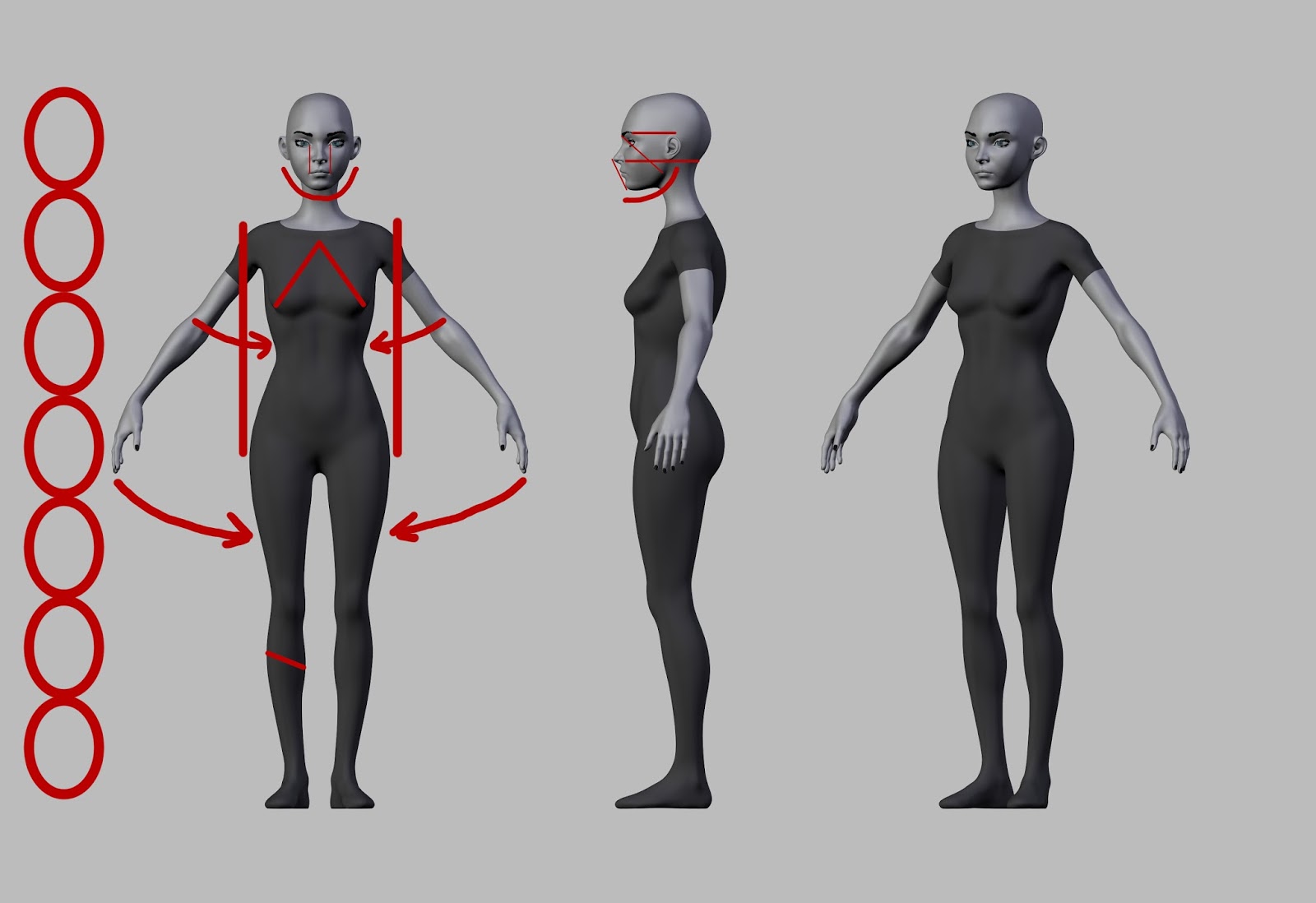 Another tip to see if your model it is on the right direction is to analyse the silhouette. Look carefully if the anatomy and the forms are looking natural, if looks strange it's because something is not fitting well. 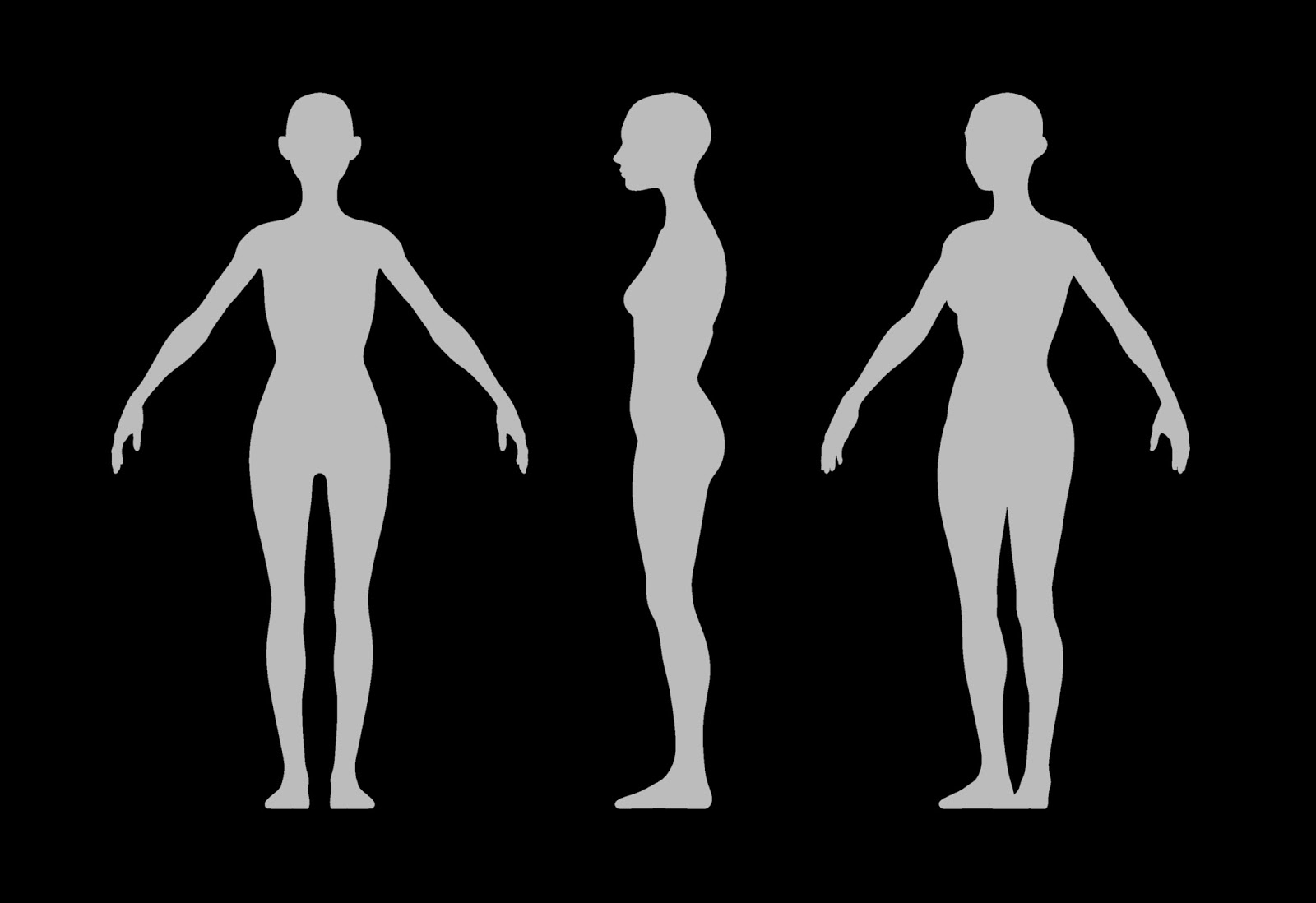 Here is the topology used in the face area, with the main loops marked. 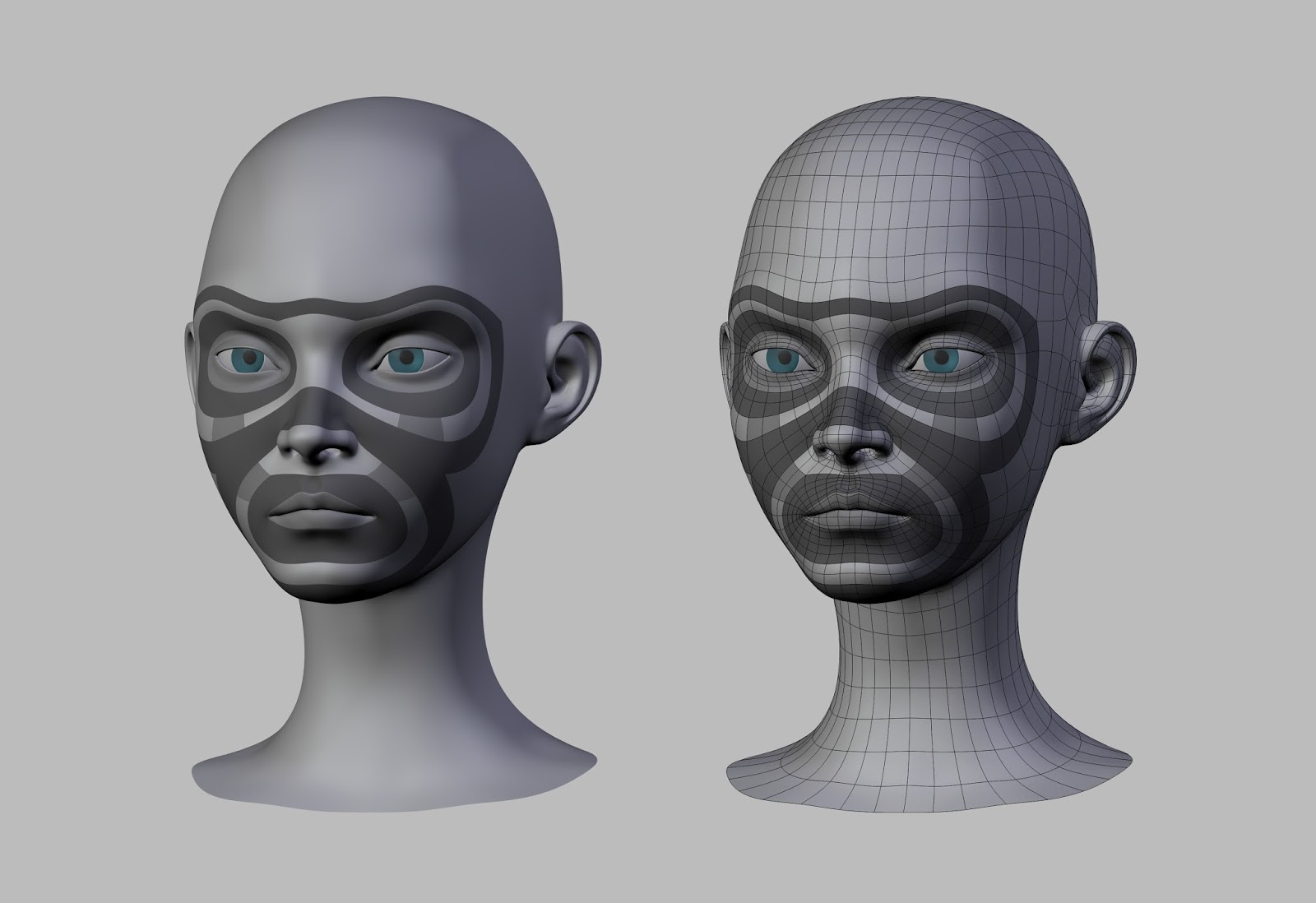 And here is the wireframe of the body and of the clothes. 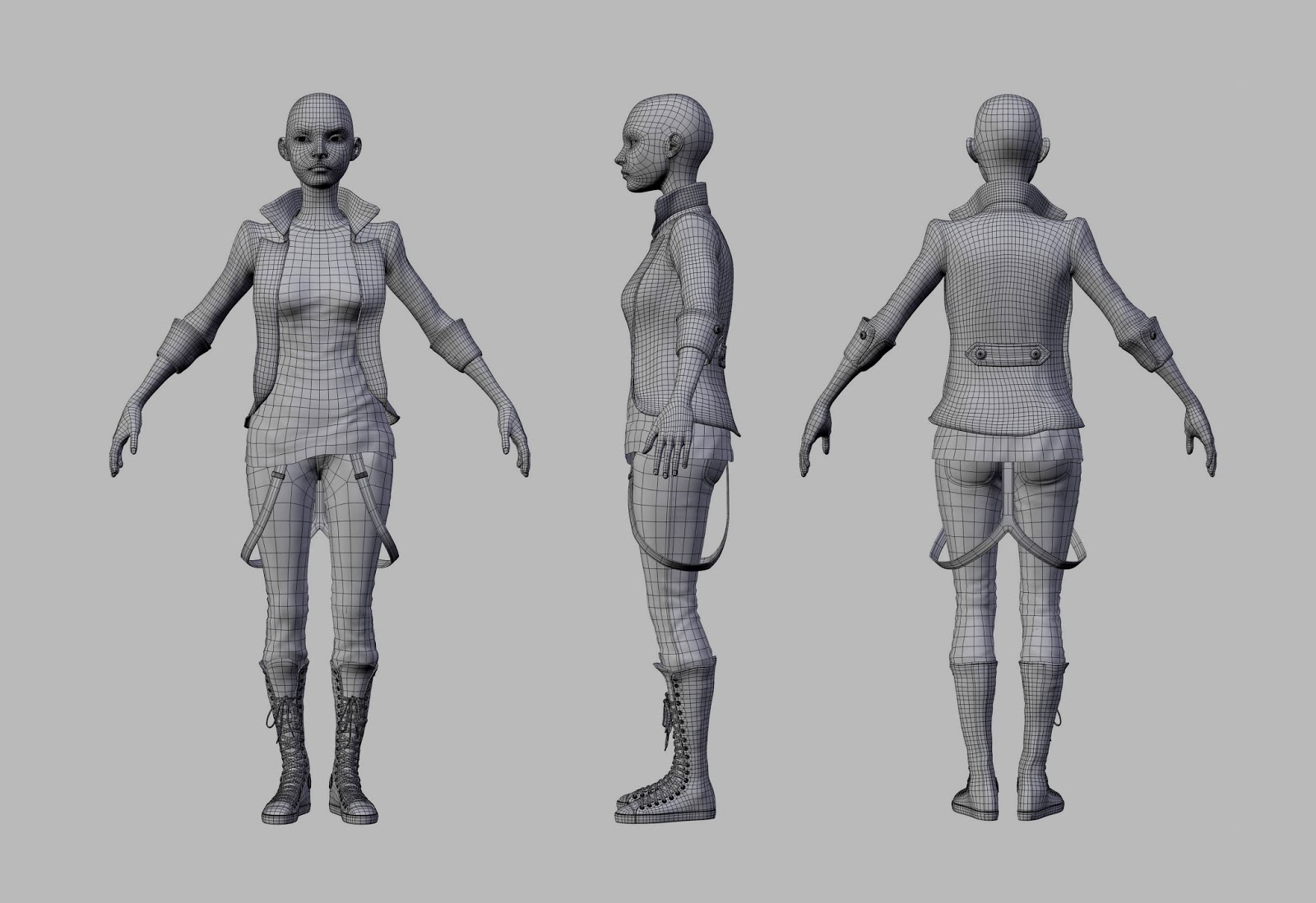 The process to modeling the clothes consist in selecting the polys in the mesh of the body, trying the match as close as possible with the clothes that will be modelled, duplicate it and separate this part. After that, you can refine and add details to the clothing model. This workflow helps to match the edge loops of the underneath meshes, this a good thing to have when or if the meshes will be deformed later, for and animation or even to do some poses. 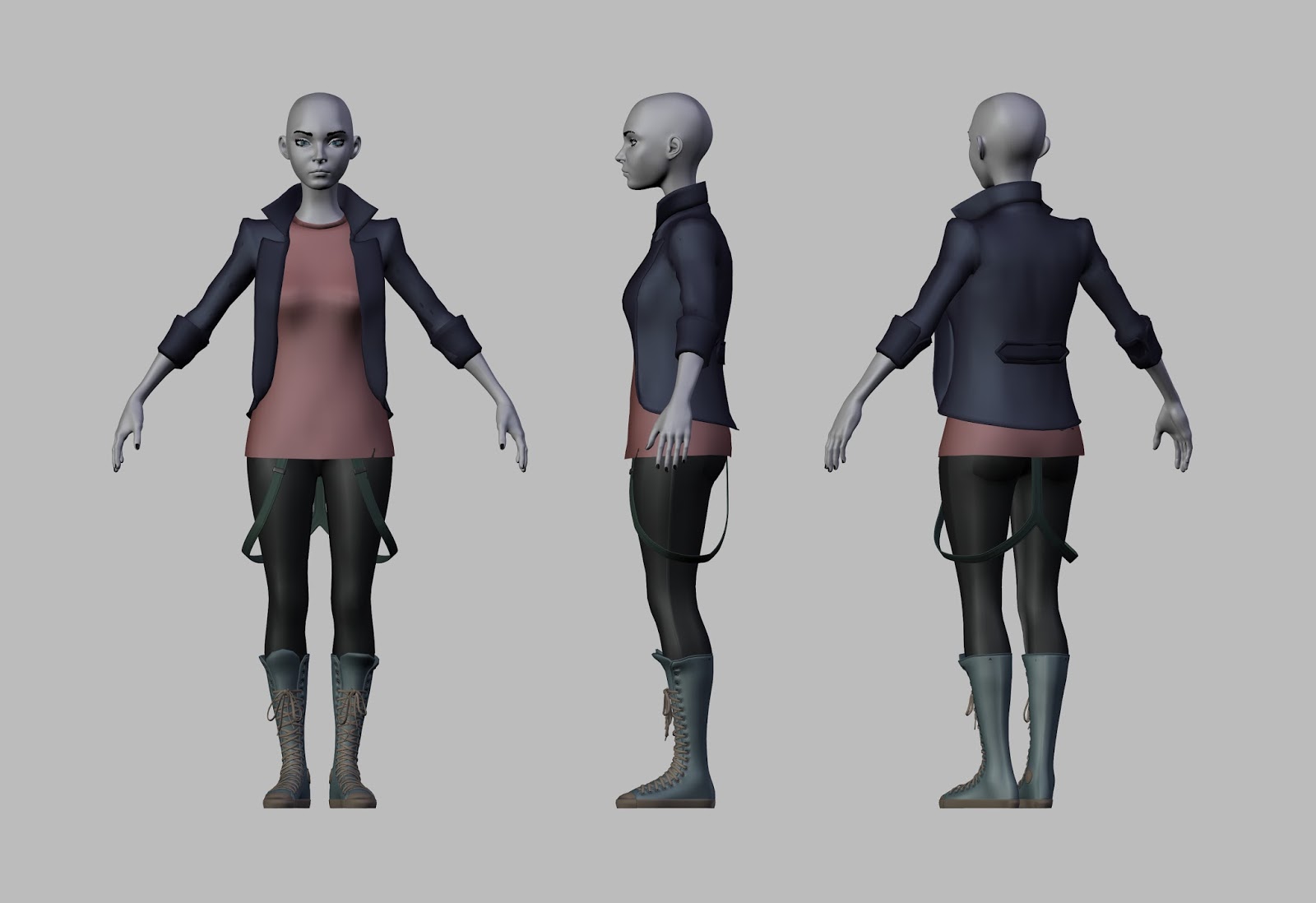 The next step I added the wrinkles and drapery of the clothing, using the Multires modifier and kept the subdivision level below three. Less polys means faster renders. 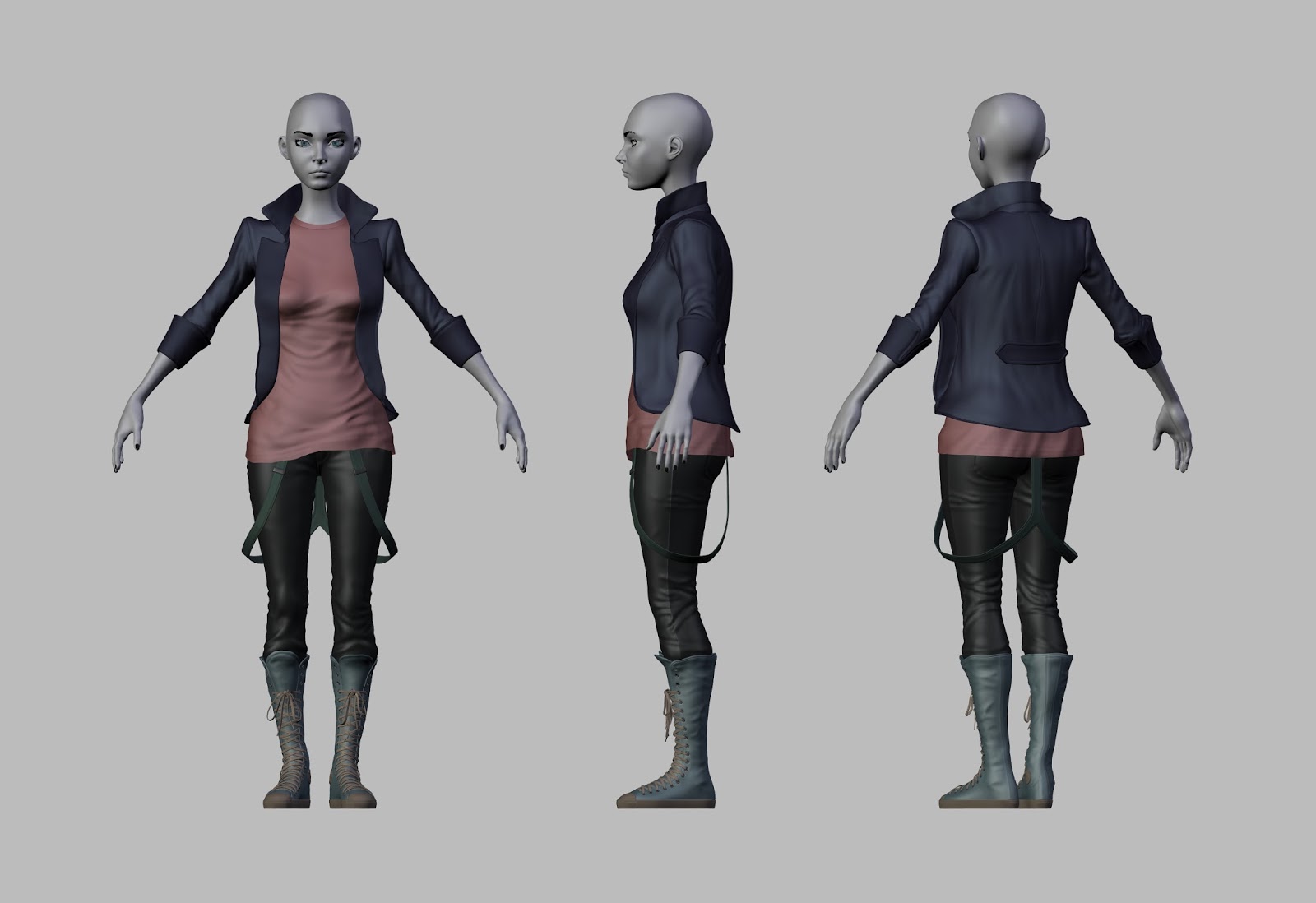 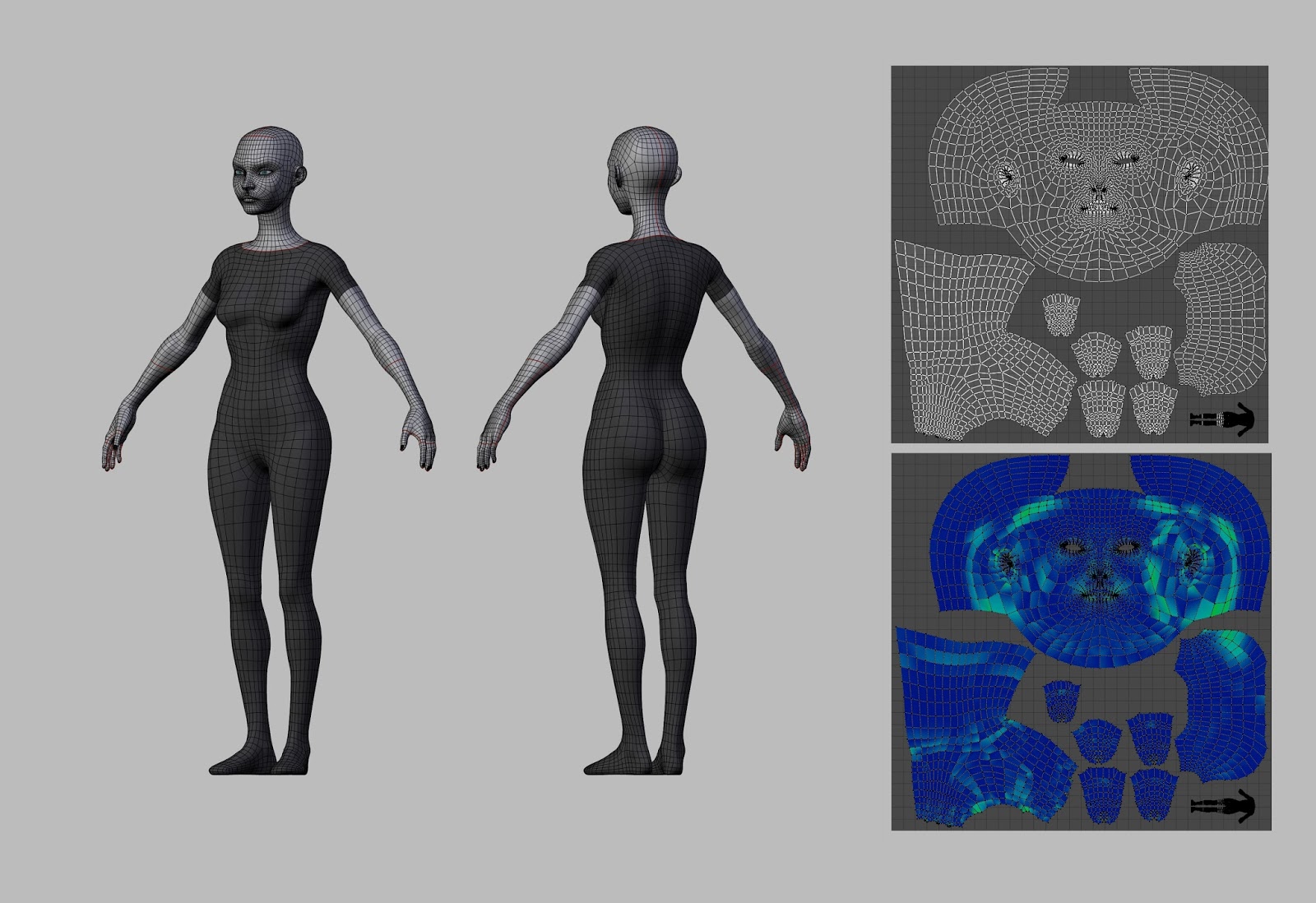 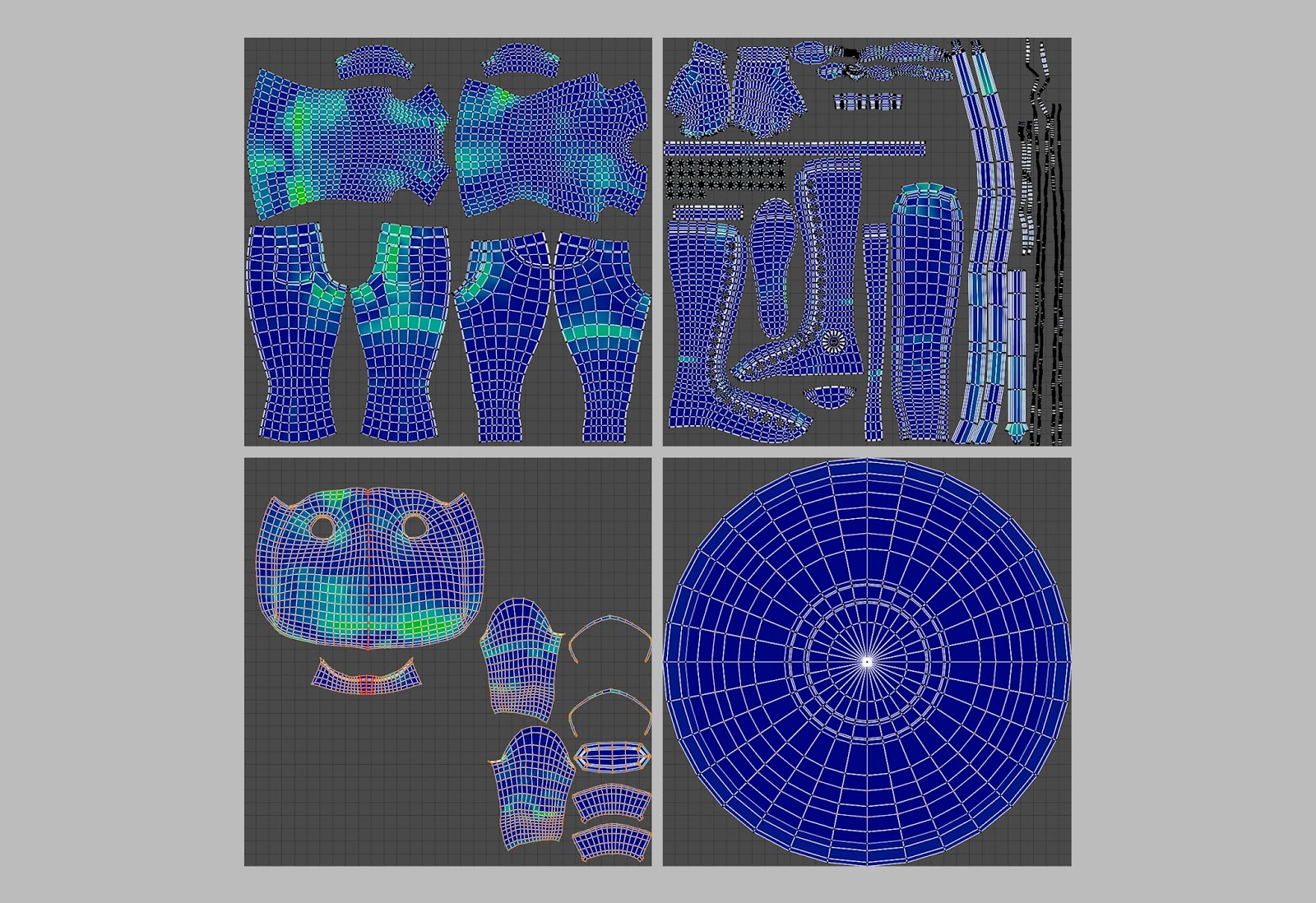 I started the texturing by baking an ambient occlusion map and start putting some base colors, to see if it works as overall tone of the skin. Next step, add some color variation. Reddish tones for parts that have more bloody flow, like the cheeks, the point the nose and the ears can have some red too. Yellowish tones for bony areas, like in the forehead, bridge of the nose and the zygomatic bone and purple tones around the eyes. This is all very soft and subtle. From here I start to add something like skin details, with a noise pattern just to break the perfection and on top of that I add some freckles. After that I added the makeup on the eyelid and in the eyebrow. The last step I did a color adjustment and add some more contrast. 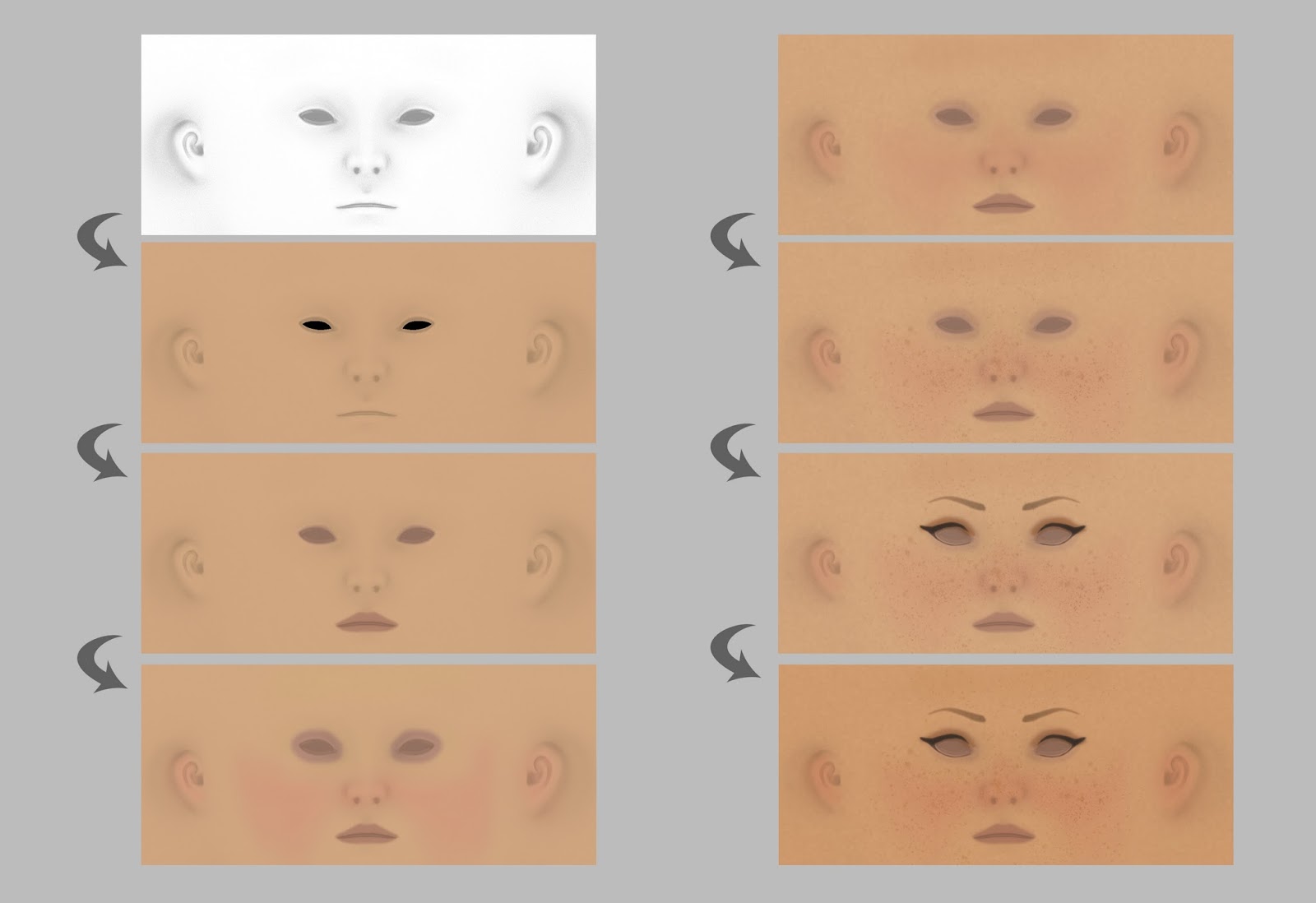 Here for texturing the clothes I used a similar process. Bake an ambient occlusion map and start working on top of that, testing first the base colors and see if everything works together. I used a lot of different noise pattern to create some kind of dirty looking and break the evenness. The eye texture was create from scratch using the same technique that Antropus teach on his tutorial about how to create a realistic eye texture. 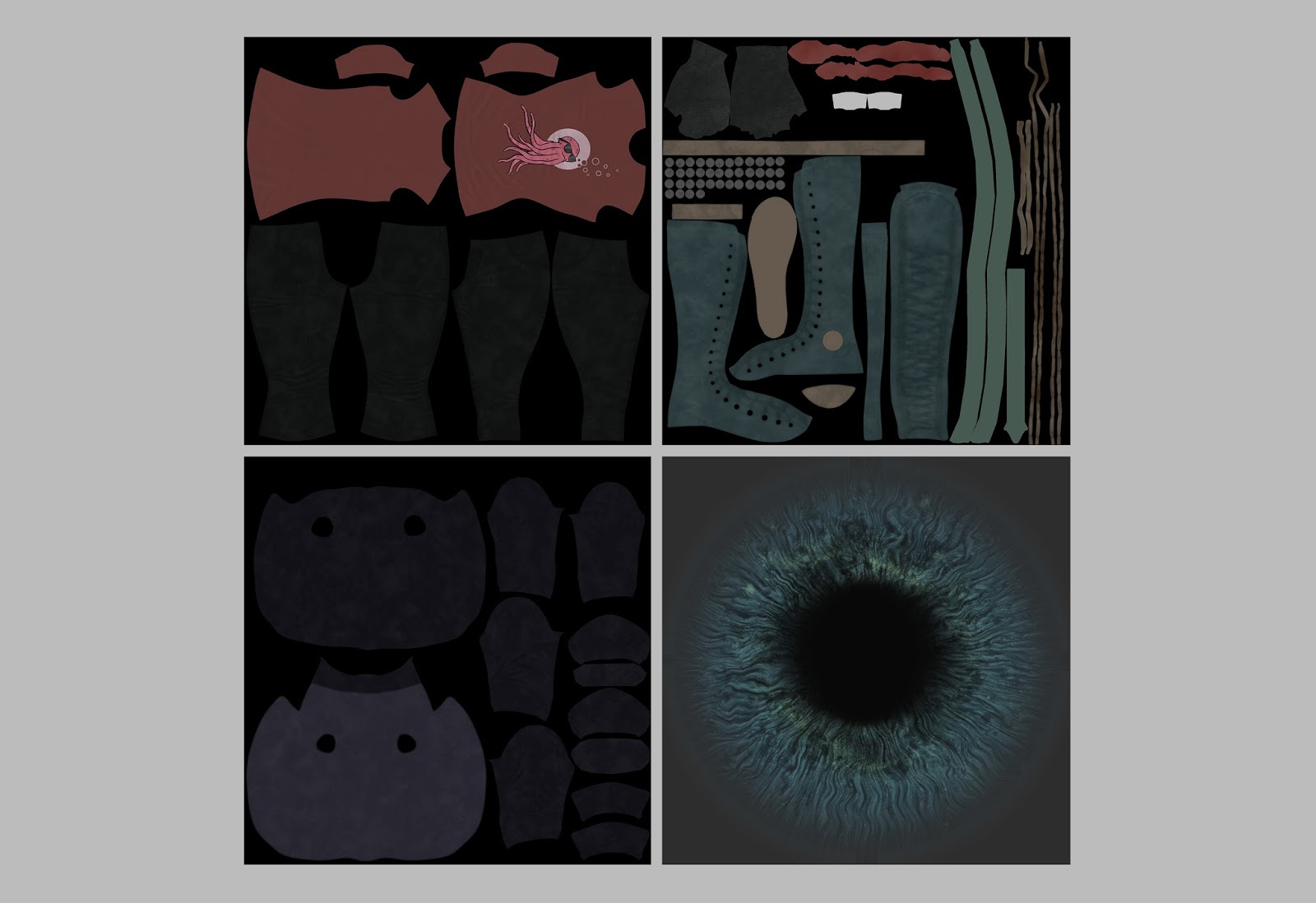 This are some others maps that I created or used, like bump, spec and reflection maps (for faking reflections). 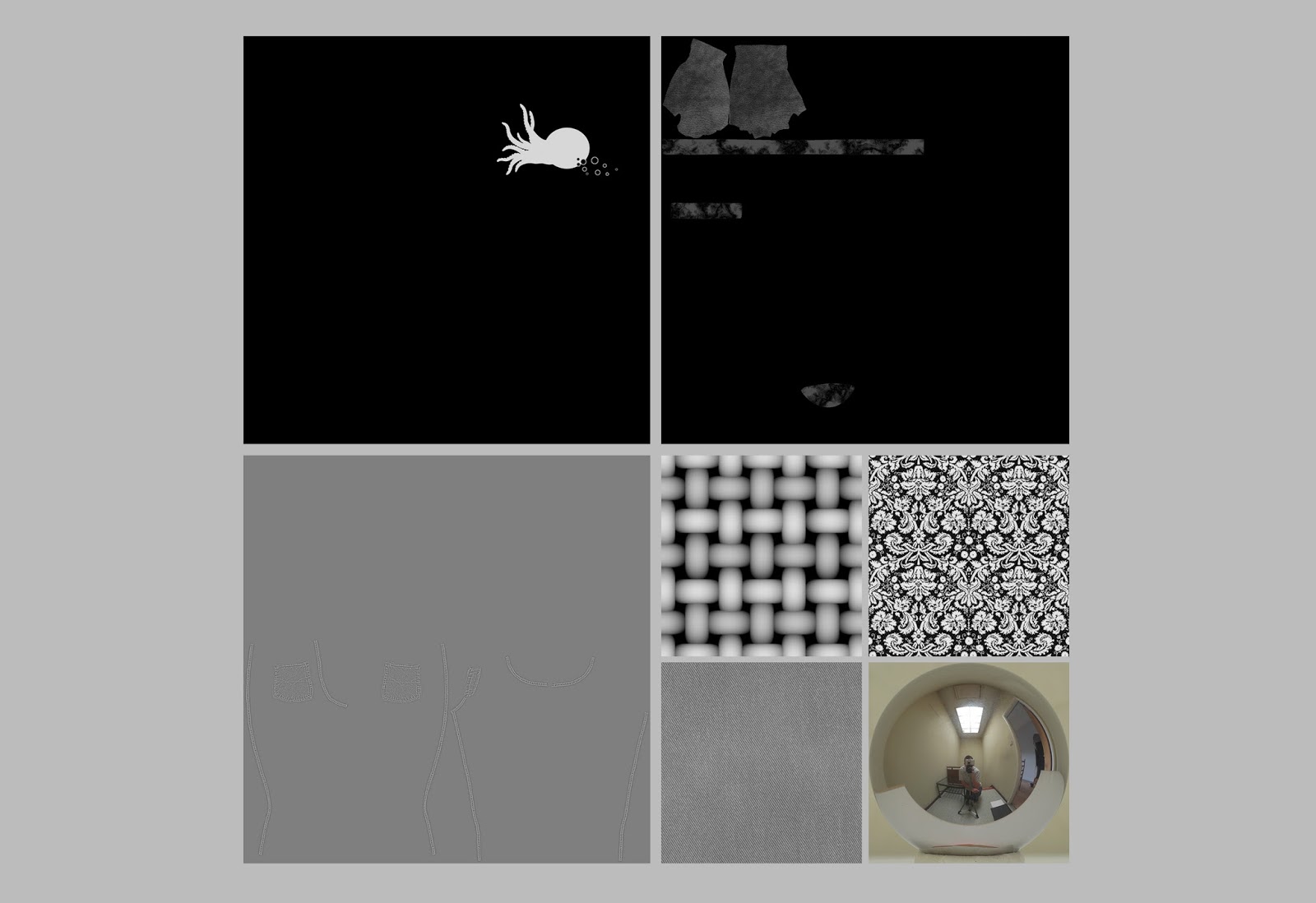 The octopus illustration I've designed for the t-shirt. 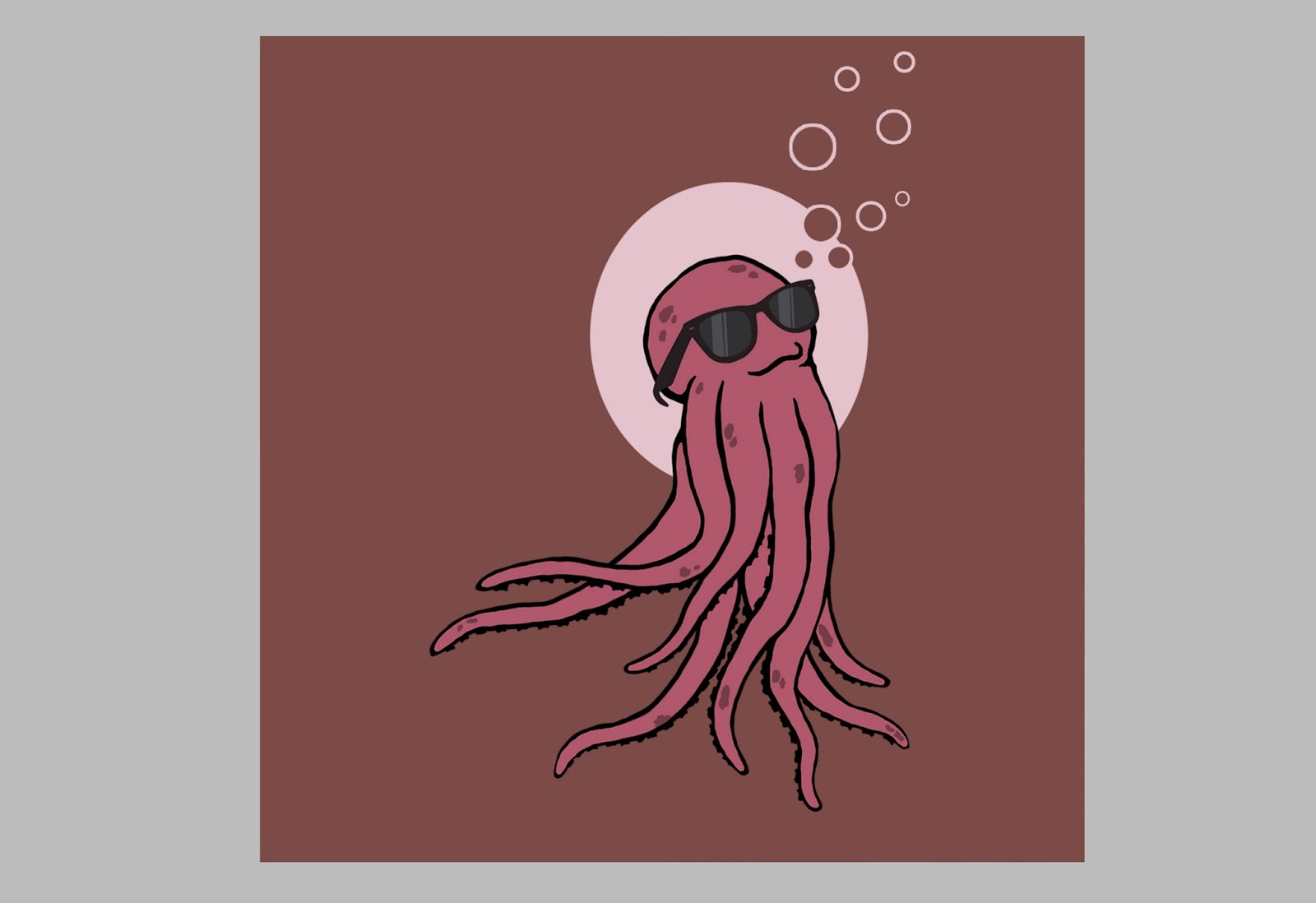 Here is the shadeless visualization of the textures applied to the model. 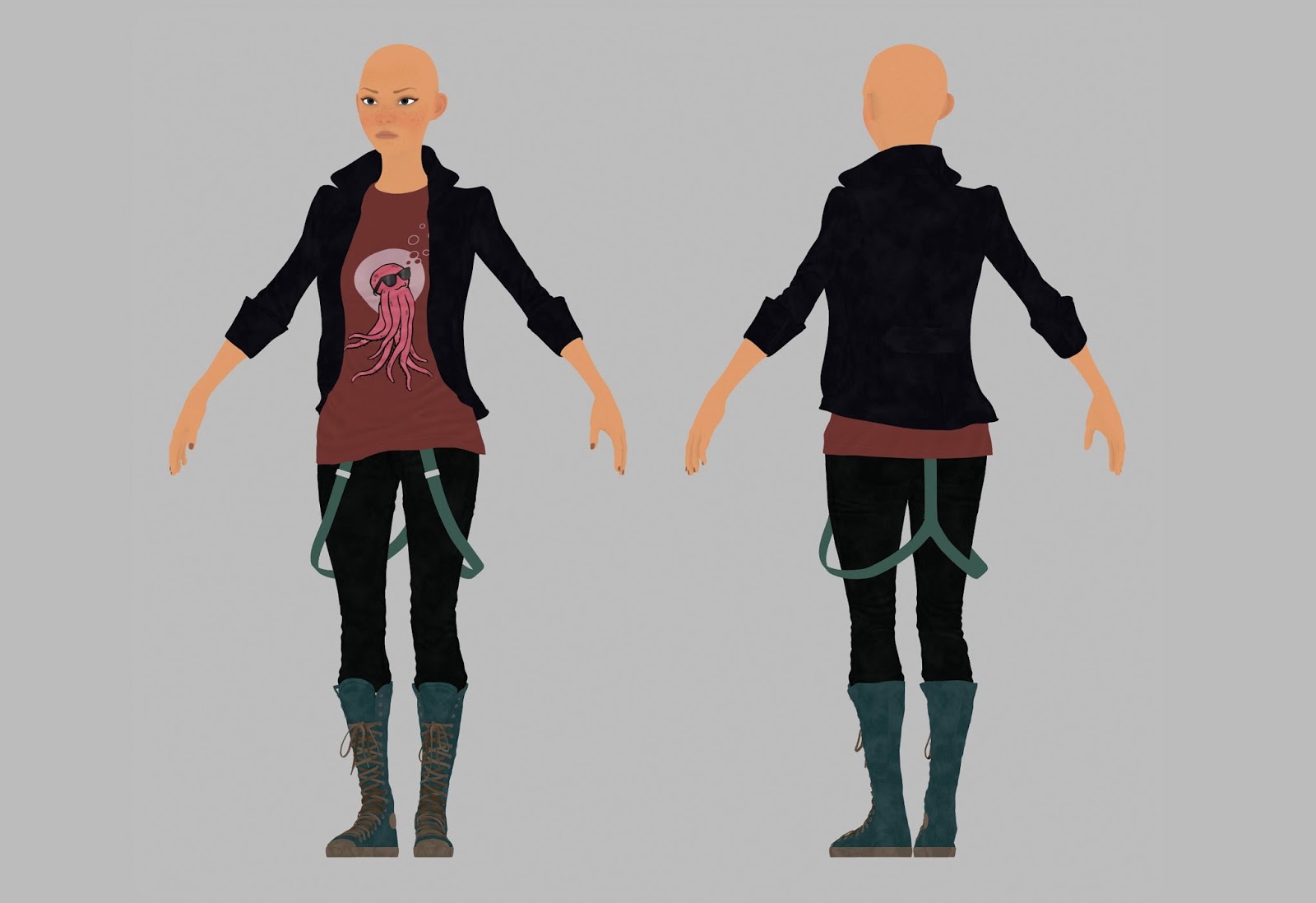 The hair was made using particles and I usually use simple children distribution, because it's more precisely, gives more control of the hair shape and distribution between the main strands. 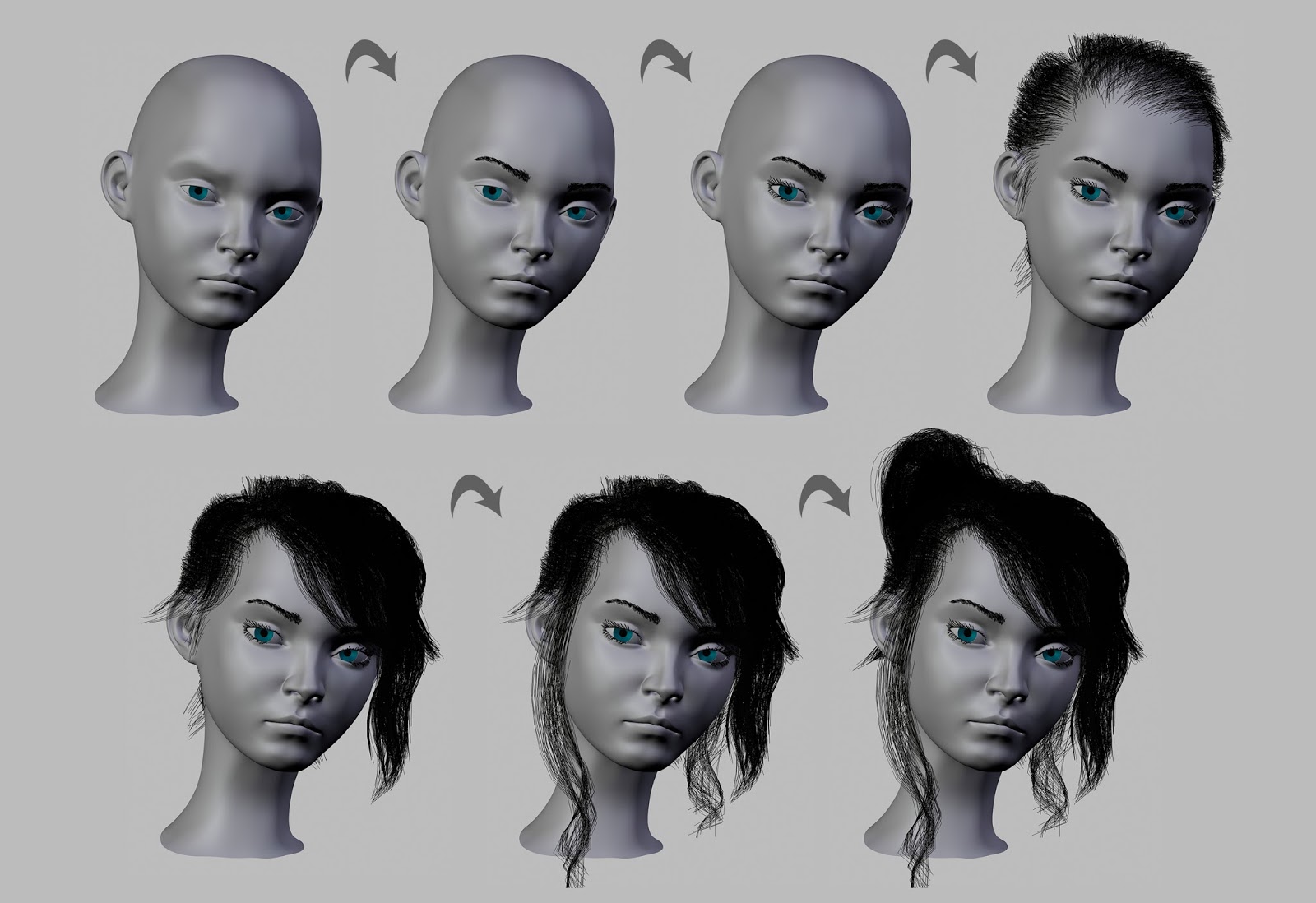 Here is Violet with everything modeled and in the final pose. 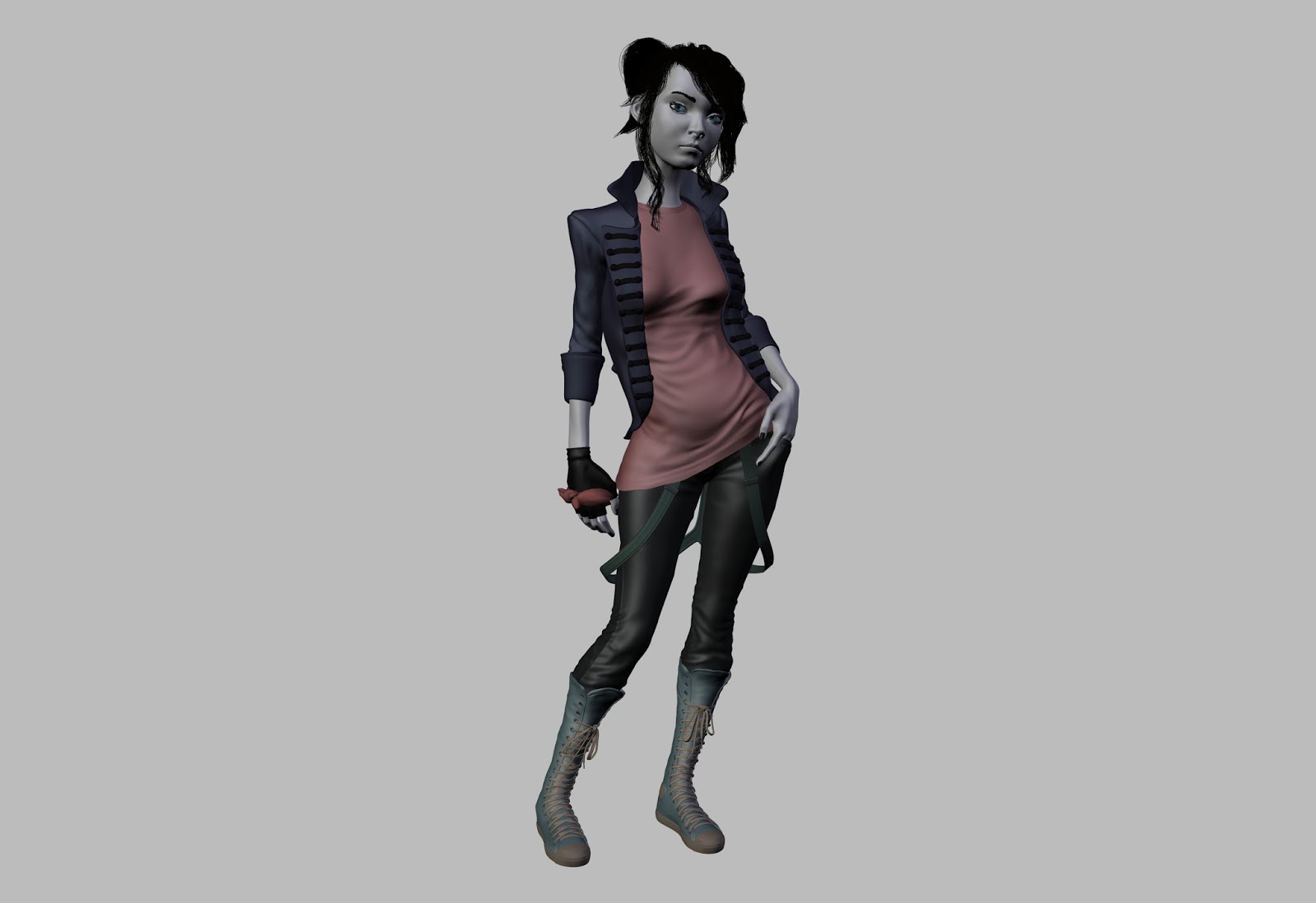 I did some scribbles in this image to point out some very important things about posing a character. Asymmetry of the lines it's one of the most important, it will give fluidity to the pose and it will make the eye of the spectator walk naturally through the imagem. The main axes of the body, the eyes, the shoulders and the hip are kinda in opposite directions, this could help to balance the character. The yellow triangle it's used to analyze the stability and the balance of the character, the farther it's the tip from the base, more dynamic and more unstable it's the pose. It's also depends of the base, the bigger it's the base the more stable and solid the pose usually are. 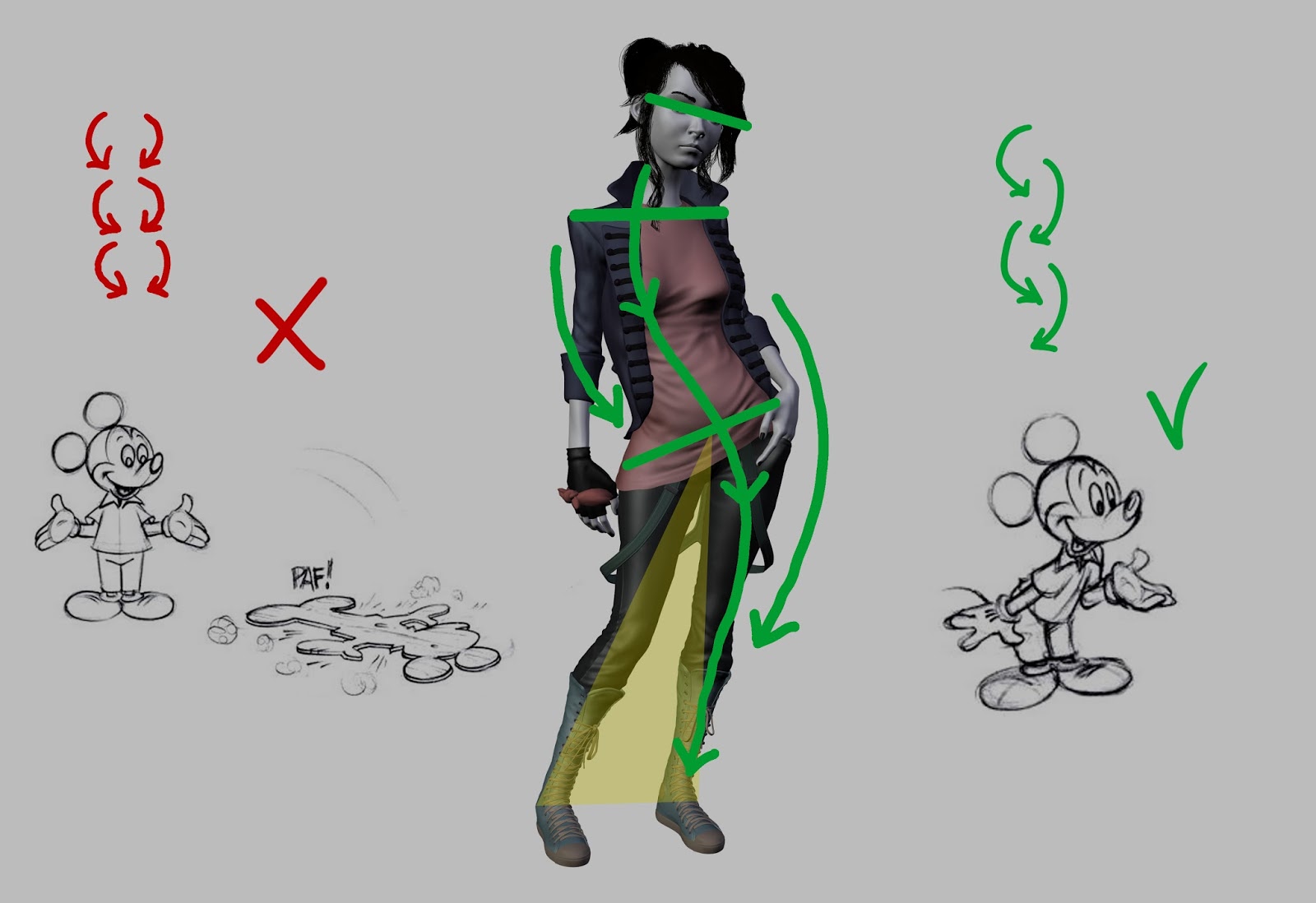 Always check if the pose it's working right analyzing the silhouette. 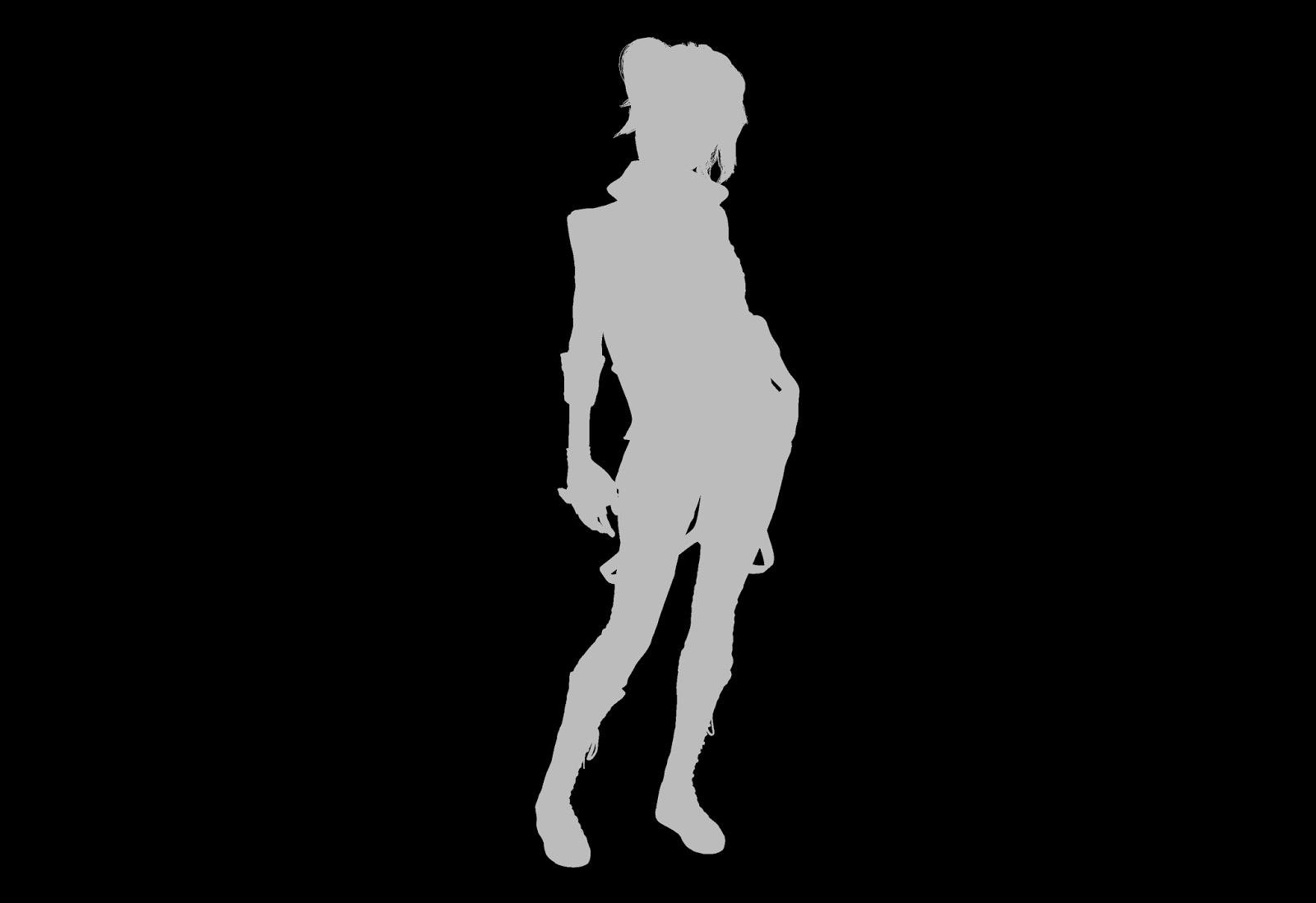 This is the final image, sorry if I didn't talked about shading, lighting and rendering, but still you can download the .blend file and see how I did those things. 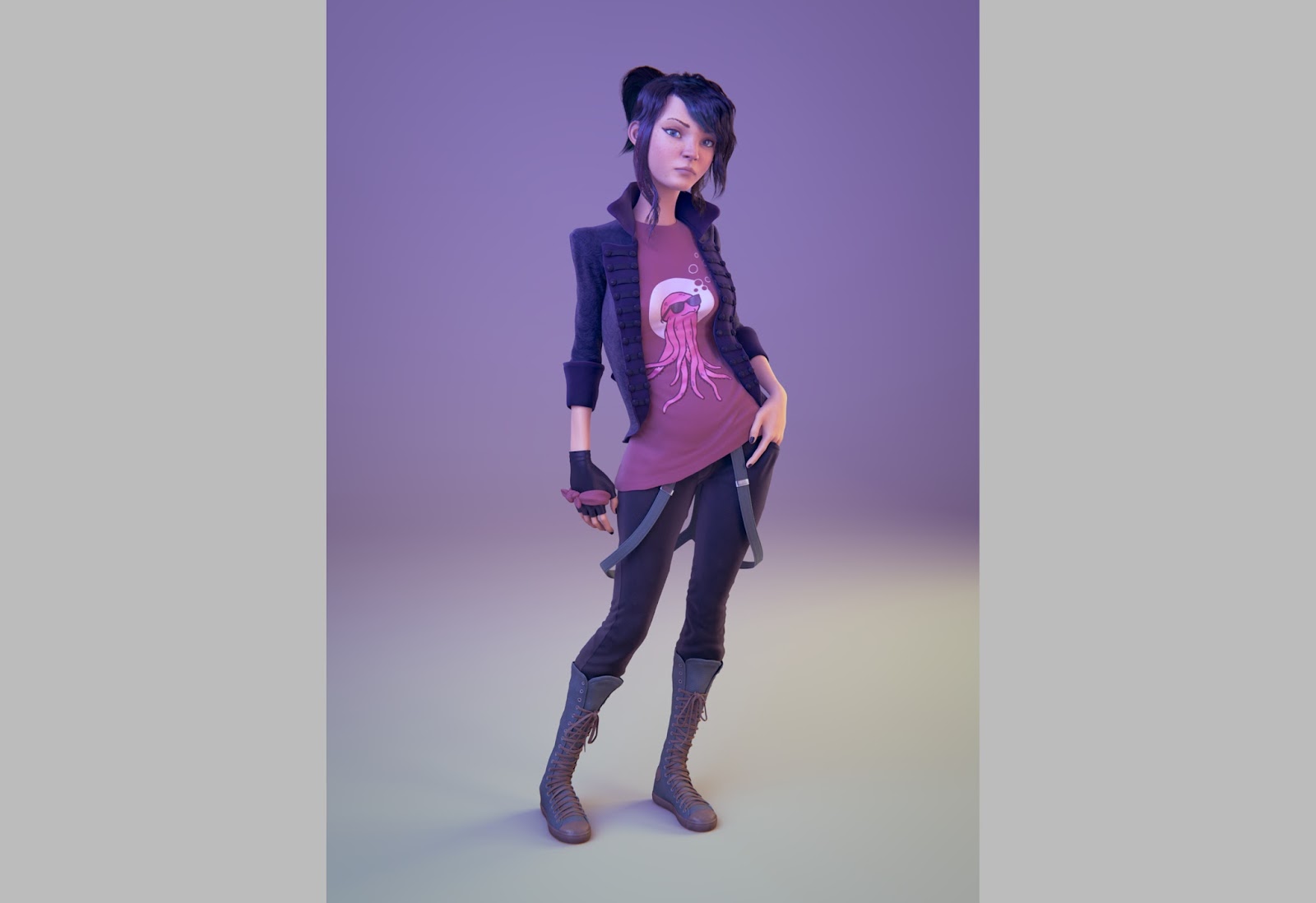 That's all, thank you for visiting my blog.  :)

Hi! My name is Lucas, I'm a freelance CG artist who like modeling characters and other stuff. I support the open source community, I have some blend files on Blend Swap, there is a making of page here on this blog and I help with donations whenever I can.